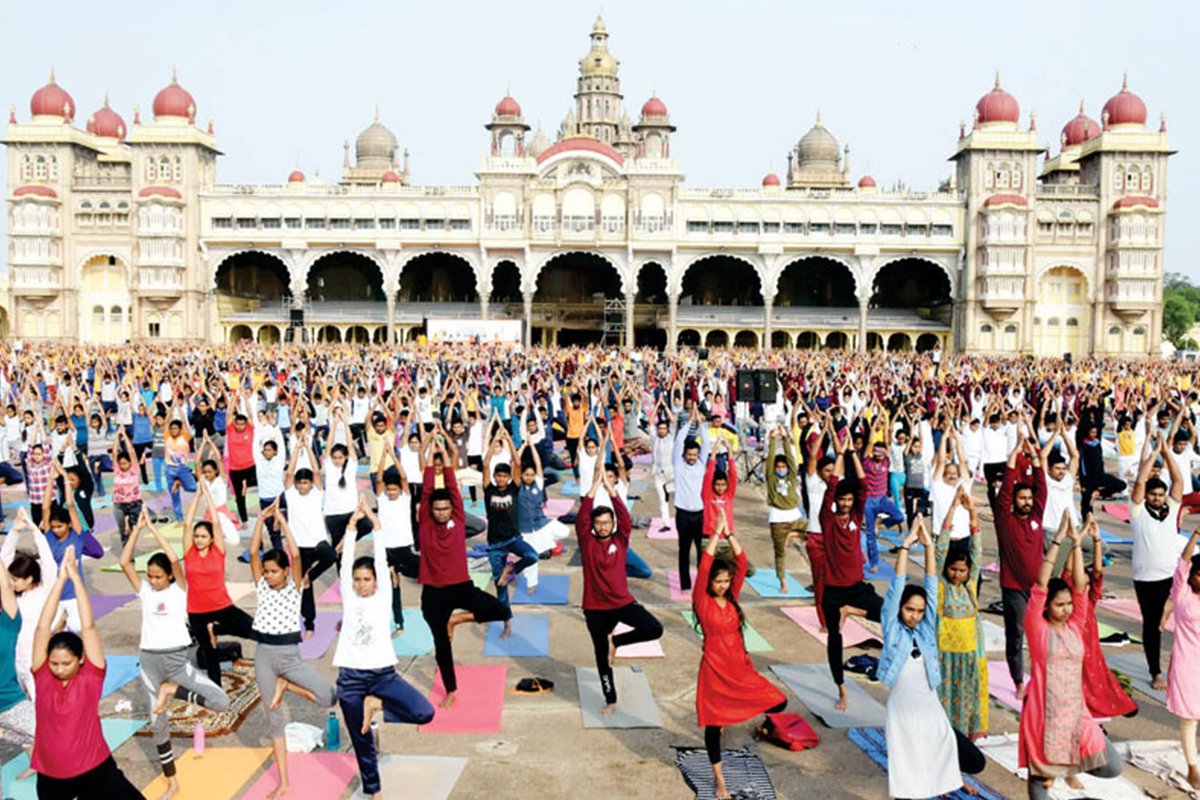 Mysuru: With just two weeks left for the main International Day of Yoga (IDY) on June 21 where Mysureans will perform with Prime Minister Narendra Modi, the first official rehearsal based on common Yoga protocol was held yesterday morning at the sprawling Mysore Palace with the imposing structure in the backdrop.

In the earlier weeks, Yoga rehearsals were held at various locations to draw more and more people in the run-up to the June 21 mega event. While the first rehearsal was held at Maharaja College Grounds on May 22 and the second rehearsal was held at Suttur Mutt on May 29. The second official rehearsal based on Yoga protocol will be held next Sunday (June 12), aiming to gather 20,000 people.

This morning, over 10,000 Yoga enthusiasts including children, senior citizens, students and the public took part in the rehearsal which was inaugurated by Avadhoota Datta Peetham Seer Sri Ganapathy Sachchidananda Swamiji by lighting a lamp. The Swamiji also watered a sapling on the occasion marking the International Environment Day.

Ganapathy Swamiji said that Yoga was born in the ‘Narasimha’ avatar. “Lord Anjaneya preached Yoga to mankind while Patanjali Swamiji popularised it. Every action of a human being includes one or the other yoga posture,” he said.

Stating that he started Yoga at his Ashram in 1976, Ganapathy Swamiji said that many people made fun of it.  “I later started ‘Dattakriya Yoga’. Yoga must be practised at least 30 minutes a day. From ‘Hata Yoga’ one can control their body and mind. Modi’s visit to Mysuru is a pride to the district. This year’s IDY must be completely dedicated to the PM. Modi has made Yoga reach the international level,” he added.